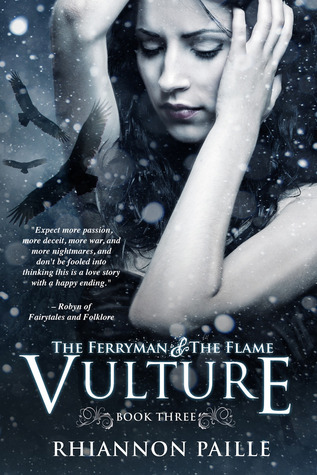 How far would you go to betray everything you’ve ever known?

Kaliel didn’t think second chances came with this much turmoil. Exiled from her home, surrounded by strangers and in love with a boy she barely recognizes, she can’t take it. She has her best friend, a new mentor, and a chance to win the war against the Valtanyana, but it’s all wrong. Desperate to salvage some semblance of her former life, she makes a deal that shatters everything.

Thanks to Rhiannon for an ARC of Vulture! She knows I’ve been wanting it for awhile.

This book took me sometime to finish because I have read the previous books and I knew this one was going to have an ending to put Shakespeare’s tragedies to shame. Still, I bit the bullet and forced myself to keep reading even as I wanted to keep living in blissful denial. Despite the heart wrenching conclusion, I expect to be one of the first to snatch up Mercy when it comes along.

The bad (the serious bad) takes a goodly amount of time to roll around and I was wary of letting it lure me into a false sense of security. There are sword fights and attacks and magical struggles so it wasn’t as if everyone was lying in fields of dandelions, but I was waiting for a very specific type of calamity and, yep, it happened. The plot trots along and there weren’t any parts I found slow despite the 400+ page printed length. (Yes, there were sex scenes in here and I skimmed/skipped them as per my usual modus operandi.)

I laud Paille for not adding a love triangle into this. That is one source of angst I cannot abide and this story already has plenty of that.

Kaliel has a bit of trouble grasping just what happened to Krishani after her death and I wish she’d been just a tad more understanding. The poor slob went through purgatory when she was killed, he needs her. I also wish she’d been more ready to embrace her power as the Amethyst Flame and fight the Valtanyana, but looking back, she’s never been eager to fulfill Tor’s designs, even in the First Era. What she did was understandable and made sense for her character, even when it had me internally screaming “nooooooooo!!!!!!!!!!”

Krishani is much better off than he was in the last book, but is still plagued by the malady of the Ferryman when he doesn’t perform his duties. He’s now willing to do them so he can be with Kaliel, but there is still an impressive amount of friction between him and Tulsen.

Pux gets a love interest in here and I really don’t like that. I would have preferred for him to remain the perpetual, never-grow up, Peter Pan type. He always just struck me as so boyish and childlike it honestly never occurred to me about him falling in love. Oh well.

I started to hate Klavotesi less in this one and didn’t want to smother him in his cloak quite as often. Perhaps it was because I more understood here why he was pushing for the things he was and towards the end he showed something akin to…humanity in his internal monologues.

If you like Epic Fantasy and New Adult Romance, this book is for you. But brace yourselves, because you might end up needing chocolate at the end.

3 thoughts on “ARC Review: Vulture (The Ferryman and the Flame, #3) by Rhiannon Paille @RhiannonPaille”