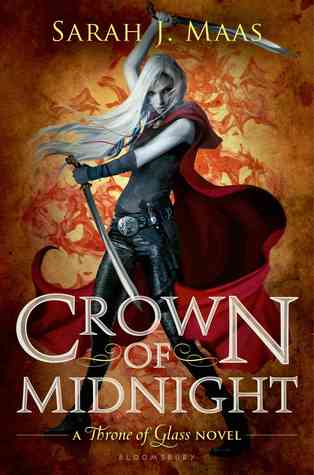 An assassin’s loyalties are always in doubt.
But her heart never wavers.

After a year of hard labor in the Salt Mines of Endovier, eighteen-year-old assassin Celaena Sardothien has won the king’s contest to become the new royal assassin. Yet Celaena is far from loyal to the crown – a secret she hides from even her most intimate confidantes.

Keeping up the deadly charade—while pretending to do the king’s bidding—will test her in frightening new ways, especially when she’s given a task that could jeopardize everything she’s come to care for. And there are far more dangerous forces gathering on the horizon — forces that threaten to destroy her entire world, and will surely force Celaena to make a choice.

Where do the assassin’s loyalties lie, and who is she most willing to fight for?

I am sorry, I really am, but this will be more of a rant/sob session than a review. This book made me both furious and heartbroken. I kind of feel like I had just went through a breakup which is ridiculous, but I am SO very attached to this story and it hurt me and now I can’t seem to get over it.

What can I say about the plot? Well, I started this book in the evening and finished at 3:00 a.m. and that should be all you need to know. I had a lot of trouble prying myself away from this, even though I kind of started hating what was happening in a “how could the author bloody do this to me” way somewhere around the 55% mark. I did think the perspective shifts were overdone, with as many as three perspectives in a single scene, still it was interesting to get multiple views, even if it could be distracting.

Can I punch Celaena, please? Really hard and in the face? I wanted to beat some sense into her for her…her obtuseness. Really, girl, get your head on straight. Chaol omitted the truth because he thought he was protecting you whilst Nehemia outright lied (after she promised there’d be no falsehoods between you, might I add) and Chaol is the one you tear into? Then we find out it wouldn’t have mattered if he’d told you or not because Nehemia freaking planned the whole thing. GET OVER IT ALREADY.

I have never liked Nehemia. I know a lot of people do, but I’m at a loss as to why. Yes, she’s an advocate for her people and so on and so forth, but she’s always struck me as an “ends justifies the means” sort and I think she proved me right. :SPOILER: I was supposed to be sad when she turned up dead, but I wasn’t because I never found her relatable or even likeable and am clueless as to why Celanea would go into depression, lying around and doing nothing after she died. I mean, when Sam was killed, Celanea cried herself to sleep then set out to gank the guy who’d done it the next morning. And at the time Sam was the only person in the world she could even call a friend. But when Her Royal Highness gets her throat cut… Really? You’re Adarlan’s Assassin. PULL YOURSELF TOGETHER. :SPOILER OVER:

Dorian…he was okay in this book. I would have liked him, maybe even adored him if it hadn’t been for this one scene toward the end where he’s “glad she was seeking comfort from him instead of Chaol.” Them’s fightin’ words, boy. Alright, so maybe I’m taking the whole “Team Chaol” thing too far. Dorian grows a lot in this book and starts to questions his father’s actions more, becoming his own man and future ruler material. I did like him better in this book than the previous one.

And now we get to Chaol. Oh, Chaol. What can I say about Chaol? Well, you’ve probably already guessed that I love him to bits. He’s brave with a heart of gooey eiderdown under that dutiful exterior and wants to do the right thing, even if he’s a little misguided right now. Self-sacrificial and passionate and courageous and loving and sheer amazing—okay, I’m fangirling, time to stop.

I warned you this would be less of a review and more of a rant. Thinking back, this book stirred so many passionate feelings on my part, maybe it deserves another star for getting me this involved. But I’m mad at it, so I refuse. The ending broke me into itty bitty, jagged pieces and I am kind of angry at Sarah J. Maas. Will I buy the next book? I kind of have to if I want to find out what happens to my OTP and if the king gets his. Oh, and :SPOILER: Celaena and Chaol had better get back together in Heir of Fire, or There. Will. Be. BLOOD. :SPOILER OVER:

Find Crown of Midnight on Goodreads

Find Crown of Midnight on Amazon

Find Crown of Midnight on BN.com