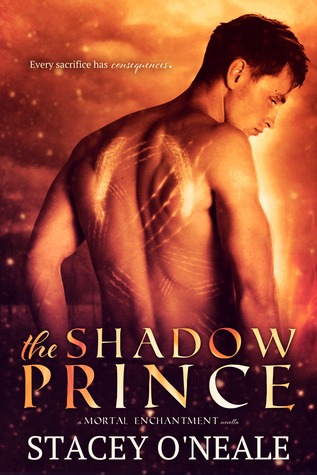 This prequel novella is FREE and available on Goodreads, Amazon, and Barnes & Noble!

Every sacrifice has consequences.

Sixteen-year-old Rowan has spent most of his life living among the mortals—learning to control the element of fire, impatiently awaiting the day his vengeful mother, Queen Prisma, will abdicate her throne. When he finally returns to Avalon for his coronation, his mother insists he must first prove his loyalty to the court by completing a secret mission:

Willing to do anything to remove his mother from power, he agrees to sacrifice the halfling. He returns to the mortal world with his best friend, Marcus, determined to kill the princess. But as he devises a plan, he starts to question whether or not he’s capable of completing such a heinous task. And what price he will pay if he refuses?

5 out of 5 stars
I read the first 30% of this book and then Life (that annoying thing that’s always meddling in Living) happened. It was a few days before I could get my hands on a few minutes to read it, but I made time, meaning to just get to the halfway point. That endeavor ended at 1:04 in the morning when I finished.

I greatly enjoyed this novella, in case there was any doubt. The mythology and the world building were new and fresh and it didn’t take long for me to develop a deep fondness for Rowan and Marcus. (Poor Marcus! Author, please let him come back!) I thought of Rowan as a bit of an annoying teenage boy at the beginning, but by the 35% mark, I was pulling for him.

The relationship with his mother is about as twisted as a pretzel, but at the same time I related to it. It really does suck to love untrustworthy people, but there’s no much to be done for it.

This was a very enticing taste of the series and the author’s writing and I am very, very excited for Mortal Enchantment. I definitely recommend this novella and if you get the chance to read the novel, I’d certainly jump at that, too!

Find The Shadow Prince on Goodreads

Find The Shadow Prince on Amazon

Find The Shadow Prince on BN.com