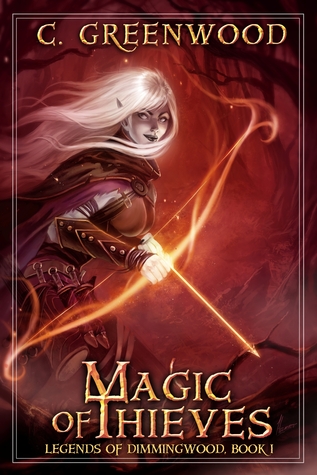 In a province where magic is forbidden and its possessors are murdered by the cruel Praetor, young Ilan, born with the powerful gift of her ancestors, has only one hope for survival. Concealment. In the shadow of Dimmingwood, she finds temporary protection with a band of forest brigands led by the infamous outlaw Rideon the Red Hand.

But as Ilan matures, learns the skills of survival, and struggles to master the inherent magic of her dying race, danger is always close behind. When old enemies reappear and new friendships lead to betrayal, will her discovery of an enchanted bow prove to be Ilan’s final salvation or her ultimate downfall?

* * * * *
When I was small, my mother taught me about the magickless—evil men who hunted our kind to destroy us. They came from across the water to steal the lands of our ancestors. Pretending to want peace, they enslaved us and sought to extinguish what they couldn’t possess, the one thing their harsh laws could never control. Our ancient powers. One day, my mother warned me, violence would shatter the safety of our home, and when that day came, we must fight. And we must win.
* * * * *

This review will be brief because it won’t take much to sum up my thoughts.

This is not a long book and I feel like that was its largest problem. I usually have nothing against short books or novellas, but this felt like the first 20% or so to an epic fantasy novel ripped out and sold on its own. It takes the main character, Ilrun, from five years of age to sixteen with no clear focus to the story. It felt like there wasn’t a defined goal yet, as if I was just reading backstory, and I spent most of the book being mad at Ilrun.

For me, the main character doesn’t have to be my favorite, but I do have to at least like him/her. I did not like Ilrun. I couldn’t really understand why she idolized the leader of the bandits as she did and I got mad when she shamelessly double-crossed other characters. She had her relatable moments, but there weren’t enough of them to redeem her for me.

On the other hand, the author did create an original and fascinating world I think I would have been more interested in exploring had this been part of a larger book. The world building was probably the best part of this story and I do laud the author on an interesting fantasy realm.

I think this could have been a good book if the writer had made Ilrun a little less brutal and given us something to resolve at the end instead of a continuous storyline that just stops. But as this story is, I really can’t recommend it.

Find Magic of Thieves on Goodreads

Find Magic of Thieves on Amazon

Find Magic of Thieves on BN.com