daindreth's assassin, fanged princess, my writing, the chalice of malvron, the secrets of the vanmars, writing update

Summer: when Texas gets hot as the guts of Mt. Doom and the mosquitoes are everywhere.  People become suddenly hard to get a hold of and the only good thing is it’s light out when I wake up. Regardless, the Muse has been hard at work.

You all might have noticed that The Secrets of the Vanmars has been polished and re-released with a new cover. It’s exclusive to Kindle right now, but come September will be returning to all platforms. Yay!

Otherwise, I’m trimming some body fat (aka profusive adjectives, unnecessary characters/subplots, and dialogue tags) from The Chalice of Malvron while the cover designers tweak the new face for it. Getting these damn covers made has been a saga unto itself and I’ve come to intimately understand the phrase “good help is hard to find.” But that’s a story for another time.

We did have some grand excitement last week when The Key of Amatahns hit #1 on the Amazon lists during a free promotion. Whoo-hoo! Happy reading to everyone who downloaded.

Baby’s taking over the world, folks.

Fanged Princess will also be getting some new covers in time for the third novella’s release and when that happens greatly depends on when this mess with Janir’s books clears up. Regardless, I do plan to have something to show you around October. That would be fun, right? A Halloween cover reveal party? The possibilities are endless…

Daindreth’s Assassin has been out querying to agents and I’ve gotten a message from another Pinterest follower expressing eagerness for that story. There are one or two factual things that need correcting (e.g. Amira kind of walks off a severe head wound in chapter #2), but I’m excited to see what will be happening there.

In other news, I’m moving into the dorms of Concordia University Texas this fall. No, I have no clue who my roommates will be, but I’m looking forward to a fresh start. I’m getting together my hangers and lamps and other fun stuff and putting together some quotes for the corkboard over my desk.

Writing this blog post is, in great part, a procrastination tactic for the arduous task of blurb writing. What blurb, you ask? Why, the blurb for the sparkly new, remade cover edition of The Secrets of the Vanmars. After more than a year, it is at last making its way into the world. Cue the celebratory dancing!

I’ve been working on this baby covertly for the past few weeks. I just didn’t want to announce anything until I was sure I would be releasing it. But as soon as I get a workable version of the blurb, TSOTV mark 2 is off to the printers for final proofreading. The revamped cover reveal is April 22nd of this month and assaulting shelves May 24th. I am consuming semi-toxic doses of caffeine and writing like mad to make sure this happens.

The third book’s re-release (and first-ever print release) should be emerging around late July (cover designer’s schedule permitting). If  everything works out with the designer and if I don’t drop the proverbial ball, I will get the fourth book out in December. (And yes, I know that’s the one you all actually want.)

Daindreth’s Assassin is now officially querying to agents (yay), but the Fanged Princess novellas are on hold for the moment. I wanted to have the fourth novella at least partially drafted before I released the third, but Haddie is not being cooperative. Ideally, I’ll be releasing that third novella before the end of the year, too. (Yeah, yeah, I know you’re thinking “she said this last year.” Kindly don’t remind me.)

It only seems fair to tell you the whole truth of why my writing has been so slow lately. Is this not the girl who boasted 3k quotas per day? The fact is that between my obsessive workouts, day job, school, and taking care of the clan, things have been pretty rocky. Also, I’ve been struggling for months now with some icky emotional stuff that I won’t whine about here, but that’s been a huge part of my slacking. And come fall, I will be moving out on my own for the first time (into a dorm, but still) and with that comes the impending student loans along with the realization that I’ll be 21 this year.

So that’s your update. Now back to that damnable blurb and my latest Creative Writing essay…

I am a devout Christian writer, but I do not write Christian fiction.

Christ isn’t something in my life, He’s everything. This has been central to me for a long time, though I have undergone a kind of spiritual rediscovery lately, seeking to explore God and godliness in a deeper, more meaningful way. 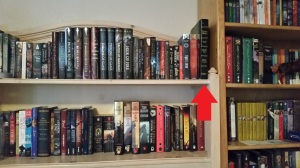 My Bible occupies the same shelf as some really bad@$$ fantasy because where else would it be?

Second only to Christianity and my immediate clan is—you guessed it—books. I take in words like air, each story another breath. Fantasy literature just fits something in me like nothing else (cheesy as it sounds) and I can’t imagine being without it. Whether reading or writing, epic fantasy in particular is almost as much a part of me as my faith.

If you’re looking for it, one can spot Christian themes in Janir and Haddie’s stories. The religious system in the Argetallam Saga is not-so subtly based off Christianity and it’s implied that Janir is fairly devout. Over in Fanged Princess, Haddie plainly wears a cross as her quintessential accessory while it’s hinted her late boyfriend introduced her to the church. Then there’s the briefly mentioned “wall of crosses” in the Falkner house, but it’s still not Christian fiction.

Christian fiction involves far more open discussion, directly addressing God or His incarnation in the story as well as His ways. My books don’t do that. I write about faith in a lightly infused versus readily visible manner. As the title says, fiction written by a Christian, but still not Christian fiction.

My reasons for not writing Christian fiction are at once simple and complicated. For one thing, I don’t want my stories to be stuffed into the subgenre avoided by so many, even by the likes of my cousin who grew up a missionary. While I still incorporate religion as subtext, making it central would offer a whole new set of challenges—getting the teachings of Scripture straight whilst not being heavy handed, for one thing.

In truth, I started writing because it was fun and that’s still why I do it. All the same, before sitting down to work on a story, I pray and ask that what I write will be pleasing in God’s eyes, but most of all that His will be done. I believe it is possible to write godly fiction without it being Christian Fiction and in the end that is what I strive for.