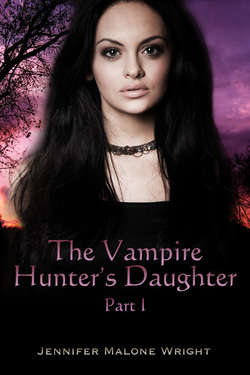 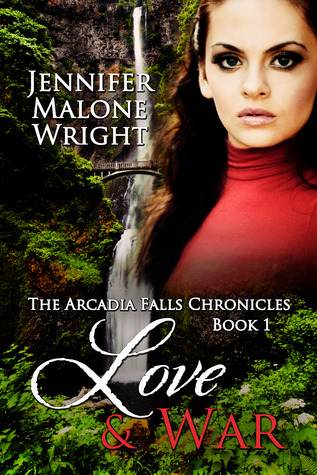 A war is brewing between the hunters and the vampires and Chloe is determined to strike against the vampires before they have a chance to attack the hunter community.

While Chloe tries to convince the hunter community, and most especially tries to convince Drew, that they should move against the vampires first instead of waiting for an attack, the group of new friends—Oscar, Alice, Drew, Chloe and Christina—are distracted by news reports of a vigilante who is saving innocent humans against what can only be vampire attacks. Fearing this vigilante will cause unwanted attention that will expose the vampire-hunter community with each person he rescues, the group attempts to discover who this mysterious potential vampire hunter is.

When they catch up with him, the group learns a shocking revelation that might just change everything for everyone in Arcadia Falls, but will have the most profound impact on Chloe herself.

This is the sequel novella series to The Vampire Hunter’s Daughter short stories which I read basically in one sitting. It picks up shortly after the last short story ends, following sixteen-year-old Chloe and her crew of vampire hunters, a young witch, and a male siren as they try to figure out what to do next in the shadow of the vampire war they are sure is coming.

I disagree with a lot of things in this series—mainly the mentality that vampires. Are. Bad. With no hope or shot at redemption even if they wanted it. I understand that they can’t all be Edwards and Angels, but it makes no sense that a person would become automatically evil after turning when there doesn’t really seem to be any genuine change to their personality or world view. And if Ms. Wright plans for the hunters to kill “all vampires” as she says, can’t she at least make it so that they find a cure so that they can un-vampire the good ones instead of committing blind genocide? (Don’t tell me there aren’t good ones. Don’t you dare.) I also got a bit irked with Chloe’s martial mentality and thought she could do with a bit of calming down.

Strangely, the one of the things I take issue with is also my favorite thing about this series. Jennifer Malone Wright doesn’t censor her talk of weaponry, firearms, and fighting and I think that’s a rare quality in artists these days (Texas girl here, what can I say?). The hunters do what needs doing and don’t worry about it being legal or acceptable to normal people.

I figured out the revelation in this story before it was revealed and I’m pretty proud of myself in spite of it being, well…easy to figure out. There was some sweet romance in here between Chloe and Drew and I really find myself liking Drew. Though Ms. Wright seems hell-bent on putting a love triangle in here and I think there really isn’t a need for it. At least Chloe made the right choice in this novella. (And so long as she keeps making the right choice, we’re good.)

This was a quick, easy, enjoyable read and I look forward to the next novella, Taking Talon, coming out in June. I recommend it to fans of YA urban fantasy!

For Fanged Mania this week, I am sharing with you three very neat vampire books which are all free on Amazon, every day and always. (So even if you don’t see this post for awhile, they’ll still be free. =) Click the covers to go to Amazon!

Post your thoughts and links to you Fanged Mania posts below!

In the second installment of The Vampire Hunter’s Daughter, Chloe Kallistrate’s life has been turned upside down. After witnessing the vampire attack that left her mother dead, she’s adopted by her grandfather into a community of vampire hunters. Although she is directly descended from ancient, powerful vampire hunters, the rigorous training schedule begins to break her down. All she wants, all she has ever wanted, is to be a normal teen.

Chloe finds renewed motivation from an unexpected encounter with a fledgling vampire, the first she has seen since her mother’s death. Staring into the glowing red eyes of the vampire, Chloe freezes, forgetting all her training. After the vampire is vanquished by her friend and mentor, Drew, Chloe resolves to train harder, to be the best, and to kill the vampire who had her mother killed. Finally mourning her mother, Chloe allows her revenge to drive her, accepting that her life will never be normal.

This is a the second installment in the short story series The Vampire Hunter’s Daughter by Jennifer Malone Wright.

A befitting book for Halloween, don’t you think? Anyway…

Chloe has started to grow on me, though I am still a little put off by the “purely evil” nature of the vampires. (Religious thing, see my review of the first book here.) I do wish that these book were just a little longer so that we could see more of Drew and Chloe and Luke and well, everybody.

Still, I have downloaded the third novella and am enjoying it greatly! I like how Miss Jennifer incorporated all kinds of mythology, not just vampires. Too often we see writers that focus on just one mythical beast and completely ignore the thousands of others. This was an easy, light read that I would definitely recommend to my paranormal reader friends and I hope you’ll check it out!

Note: THE VAMPIRE HUNTER’S DAUGHT PART I is always free on Amazon. Download it here