Today I am hosting one of my All Time Favorite Authors–Jadie Jones, creator of the Moonlit Series! And she even has a surprise for us at the end. 😀 So without further ado, Jadie Jones, everyone!

Georgia native Jadie Jones first began working for a horse farm at twelve years old, her love of horses matched only by her love of books. She went on to acquire a B.A. in equine business management, and worked for competitive horse farms along the east coast. The need to write followed wherever she went.

She currently coaches a hunt seat equitation team that competes in the Interscholastic Equestrian Association, and lives with her family in the foothills of north Georgia. When she’s not working on the next installment of the Moonlit series, she is either in the saddle or exploring the great outdoors with her daughter. Moonlit, book #1 in the Moonlit trilogy, is her first book. The sequel, Windswept, has been accepted by WiDo Publishing, and is due for release mid-2014.

What made you want to write?

Books have been a form of escape and exploration for me as long as I can remember. When I was younger, authors seemed like the keepers of the keys, as if they’d tapped into some kind of fairy dust not everyone could see. The idea of being a part of the magic, and creating sanctuaries for other readers really appealed to me

What was your main inspiration for Moonlit?

I read a fun fact that humans see less that 1% of the color spectrum and hear less than 1% of the sound spectrum. That *really* freaked me out. What in the world is in all that clear and quiet? What is happening all around us that we never experience? This was the launch pad for the “Unseen World,” a second dimension that coexists with ours. Then I had to develop a reason the dimensions were kept separate, why the Unseen creatures want to be in our world, and the consequences of that happening.

Without giving anything away, do you have a plan as to how the series will end? A general idea?

I always thought I knew exactly how the series would end. Then, while drafting book #3, something small happened early on that completely changed the way I envisioned the final pages. My main goal is to satisfy my tribe of Moonlit supporters. The story is very unique, and it’s not a formula read. So those who have emotionally committed to Tanzy and her quest have worked nearly as hard as she has to uncover what’s happening and why. I will do everything in my power to reward my tribe for taking this journey with Tanzy by way of a spectacular ending. That’s my goal, anyway.

Tanzy’s horse, Moonlit, plays a significant role in the story. Is there any particular horse that inspired the character of Moonlit?

Yes! When I was 17, I bought a two year old, dapple gray horse named Luna (thus, the inspiration for the name). I helped train her and hoped one day to start my own breeding farm with her. When she was five, she developed a Sarcoid tumor, which is a kind of cancerous virus, just below her knee. The tumor grew into her leg and wrapped around the bone. I spent every dollar I had to fix it, but we ran out of money and treatment options, and I was advised she had about a year before the tumor would likely make it unable for her to walk. I wound up giving her away to a complete stranger in Florida who had a great equine dermatology connection. This veterinarian was able to completely destroy the tumor threatening her leg. She went on to claim national championship titles, and has had several very successful babies. She lives at a beautiful farm in Florida, and I still keep in touch with her new owners. And I still miss her very much. There’s a picture of her on my desk I look to when I’m sorting out my thoughts.

If you could meet any one of your characters in real life, who would it be (besides Lucas)?

This question made me laugh! Short story: I was in a restaurant for a meeting when a waiter walked up who looked exactly like I envisioned Lucas. I mean, 100%. He even had a small scar across his cheekbone. I was so stunned. It’s like he stepped out of my head. I felt myself turn red and I couldn’t remember how to order water. It was ridiculous. That being said, I think I’d like to meet Maris. The ocean fascinates me, as do those people who seem to tap into nature in a whole different level than the rest of us. I think she’d be really interesting.

Are you working on any other projects we should watch for?

Once the primary series is wrapped up, I will turn my full attention to a new cast of characters in a supernatural story set on a fictional island, where ghosts from the past have a very active role in changing the present and future of those who visit. I have three other stories I’m making notes for in my journal. Also, there are a couple of ways we hope to extend the stories around secondary characters in the Moonlit series.

Peeta all the way!

How about… what is my secret dream for my career? I really want to see the Moonlit series made into movies – not because of the hope of a big payday, but because the story has so many visual elements, and I think a creative producer/director could take this story and paint an incredible picture. I want to see the images in my head brought to life. 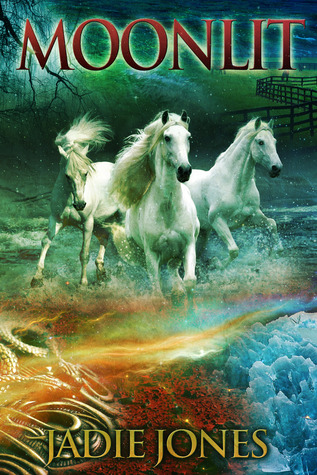 Read my review of Moonlit

For those who have read The Key of Amatahns and The Secrets of the Vanmars, or even if you’ve just been following me on Facebook for long enough, you know that horses are my first love. I am firmly convinced that the equine race is God’s artistic masterpiece and can rattle on for hours about how gorgeous they are. I believe the scientific term is “horse crazy.” The horse is the epitome of beauty, power, and elegance. (And anyone who disagrees hates puppies.)