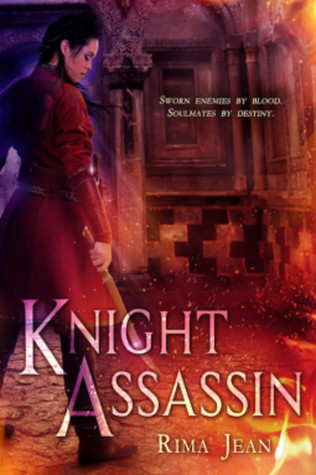 Seventeen-year-old Zayn has special powers she cannot control—powers that others fear and covet. Powers that cause the Templar Knights to burn Zayn’s mother at the stake for witchcraft. When a mysterious stranger tempts Zayn to become the first female member of the heretical Assassins, the chance to seek her revenge lures her in. She trains to harness her supernatural strength and agility, and then enters the King of Jerusalem’s court in disguise with the assignment to assassinate Guy de Molay, her mother’s condemner. But once there, she discovers Earic Goodwin, the childhood friend who still holds her heart, among the knights—and his ocean-blue eyes don’t miss a thing. Will vengeance be worth the life of the one love she has left?

5 out of 5 stars
When the main character gets raped within the first three chapters, you know you’re in for a grueling, gut-wrenching ride. There was a moment where I wondered what I’d gotten myself into, but putting this book down was never an option—I’ve been hopelessly hooked since I saw the cover reveal on a friend’s blog and I downloaded it the same week it came out.

The plot:
There were lots of parts where I put down my Kindle and paced, chewing a hole in my cheek and trying to stave off a panic attack as I worried at what would happen next. At around the 90% mark I started to panic because this appears to be a standalone and things were far, far from where I wanted them to be. As for mechanics, this book was a concise, compact read that flowed smoothly and I really can’t think of anything I’d like to add to the plot.

I very much found the author’s exploration of the post-Crusade Holy Lands to be interesting. With jinn and magical cults thrown in, there’s a bit of historical reshaping, but I still thought the historical influences to be one of the main draw points for the story.

The characters:
Normally, virago characters get on my nerves very easily, but Zayn didn’t. She has so much emotional baggage and turmoil and struggles and her victories are never guaranteed, but in spite of everything she’s been through she still has a heart—you’d have to be a soulless robot not to love her.

I’ve been fantasizing about making a delivery to a Mord’Sith dungeon again. This time I would be dropping off Guy de Molay. I just…he…ugh. I’m getting angry just thinking about him. There’s a persona to bring out your inner psychopath.

I really wish Earic had gotten more time on page. He was a sweet, brave love interest and a welcome deviation from the bad boy archetypes that have been going around like a virus lately. (The scene where he turns up kind of reminded me of Ivanhoe, on a random note.)

This appears to be a standalone, but…I’m sure there could still be more to this story. The twist at the end about Earic’s friend back in England had me going “OOOOooooh” and crossing my fingers, wishing the author would write more books.

Knight Assassin is not a fluffy read, it is not a bubbly read. It will punch you right in the feels and rip you apart like a blender. But I highly, highly recommend it to anyone who loves dark fantasy, historical fantasy, or assassins. Well done, Ms. Jean, and I really, really want that sequel.

Today I am interviewing the talented, hilarious (in a good way), and stupendously awesome Chloe Jacobs. Check out her fun answers to my interrogation (interview), drop by her media sites, and take a look at my 5-star review for her debut novel!

Sum up yourself in a tweet (140 characters or less)!

I was tossed in the river in a basket as a baby, raised by ninjas, and trained as a secret agent. Okay, one of those might be an exaggeration

Where did you get the idea for Greta and the Goblin King?

Well, originally I set out to write a twisted fairy tale because I love them. I love learning about where they come from and the meaning that was behind them when they were first written. But I didn’t want to re-do a fairy tale that had already been done often already. When I settled on the tale of Hansel and Gretel, and thought about where I could take it, I know that the real story I was going to be telling wasn’t about a witch in the forest and a gingerbread house, it was about an entirely new world beyond that witch’s oven where there would be more than just witches, but also goblins , ghouls, ogres, faeries, and an eclipse that turns them all into raging monsters.

Didn’t you read the whole trained by ninjas thing?

Seriously though, I’m not really like Greta at all. I mean, I can be pretty stubborn, but that’s about as close as we get. Greta’s been through some serious tribulations and all I can say is I’m glad I haven’t had to live that kind of life. It was hard enough trying to imagine what it would be like to lose everything, not only your family and friends, but even the world as you knew it. I’m not sure I would have ended up as strong as she is.

In your book, you have a lot of new twists on old mythical creatures. Which one of your reinventions is your favorite?

Well, I really do love Isaac, but that might be for reasons other than the mythical twist his character ended up with. *grin*

I also loved to research the Lamia. I took the idea of the witch who eats children from Hansel and Gretel and found another similar myth. Did you know that in Greek Mythology, there is a creature called Lamia, who was tricked by Hera (Zeus’s wife) into eating her own child, and thereafter developed a bit of a taste for it? (She might have been driven a tad insane.)

I try to write every day (or edit, depending on the stage I’m at). For me, the writing process is about challenge. I write best when I tell myself how many words to get, and then I have to sit down and get it done before I can do anything else, like fool around on Twitter. *grin*

If I could go anywhere, I’d pick Egypt, or maybe Scotland, or China. I love the old places. The ones where history bleeds from the very stone and there are hundreds of stories that time has forgotten, just waiting to be rediscovered and told again. I should say that I would want to bring my husband, but he’s more interested in hiking through the woods and communing with nature, so maybe I’d bring my son because he loves that stuff as much as I do.

I love to share what I’m reading lately, and recently I finished Throne of Glass and Crown of Midnight by Sarah J. Maas which were so amazing, I can’t wait to get my hands on the next one. I also read Tara Fuller’s second book in her reaper series, and the hero, Cash, is to die for! And I’ve just picked up The Dream Thieves by Maggie Steifvater and Graceling by Kristin Cashore so I’m looking forward to those.

I love getting recommendations, too, so tell me what you’re reading!

Thank you so much for letting me come by and chat today!

Read my review of Greta and the Goblin King