Today I have the pleasure of hosting Natalie Wright, author of the inventive, strikingly original Akasha Chronicles to celebrate the release of the third book, Emily’s Heart. (Read my review of the first book, Emily’s House, here.) 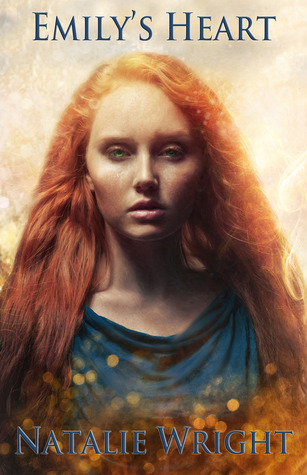 Seventeen-year-old Emily Adams unintentionally unleashed a shadow god’s dark energy power into the world and started an Apocalypse. But Emily is also the only one that can end the dark god’s reign. Though the powerful faerie magic of the golden torc is still coiled around her arm, self-doubt threatens to undo her. Emily wants nothing more than to feel the soft kiss of her one true love, but he won’t even speak to her. Her first crush is still quite dead and her best friend remains a prisoner in the dark god’s house of nightmares. A growing legion of black-eyed shadow people, devoid of conscience, roam the streets. Emily needs help now more than ever, but redemption seems far off indeed as she faces the expanding darkness alone.

Emily will need an army of her own if she is to save the world from being taken over by pure evil. But will a small band of Lucent geeks and freaks be enough to send the dark god packing?

Amidst chaos and ruin, will love blossom in Emily’s Heart?

Smashwords *Please use discount code WX85L for 25% off Cover Price!

The Akasha Chronicles Boxed Set – You SAVE 30% off the Cover Price for All 3 books! An Amazon Exclusive

What was your biggest inspiration for the Akasha Chronicles?

The original idea came from a vision I had while in hypnosis! Nearing the end of my last session, I got a vision of a golden object hovering over rolling, green fields. I didn’t know what the object was, but I couldn’t shake that vision.

I began doing research to see if I could find out what the strange, golden ring was. After weeks of scouring the internet, I saw a picture of an ancient Celtic torc. That led to more reading on the ancient Celts and I came across a story about an order of women that guarded the sacred flame of Brighid (an Irish Celtic goddess that later became a saint). It was said that they lived in a sacred grove of oak and ash, and that no men were allowed inside their sacred grounds. There were even legends that any man who entered the grove went mad or never came back.

The torc, the sacred grove, the ancient order of priestesses – I used all of that (and more!) to create the story in my first book, Emily’s House. The other two books, Emily’s Trial and Emily’s Heart, are extensions of book 1 but focus more on Emily in her modern, American world (rather than the ancient Celtic backstory of her ancestors).

What do you think is the greatest lesson Emily has learned since Emily’s House?

Wow, she has had to learn so many! Let me start by saying that Emily’s greatest challenge is her own self-doubt. Despite her powerful magick, she doesn’t believe in herself or see herself as capable. Incidentally, I think a lot of girls and women can relate to this, don’t you? I’ve met so many amazing women in my life who don’t see themselves as the rest of the world sees them – capable, smart, beautiful.

Anyway, in book 3, Emily’s Heart, in order for Emily to solve the problem of the rather *huge* mess she made of things in book 2, Emily’s Trial, she has to first find the ability to believe in herself. There’s no prince that will rescue her from the tower 😉 She has to save herself. In fact, she’s the one saving the prince :0

Without giving any spoilers, can you tell us about which scene in Emily’s Heart was your favorite to write and why?

That is hard to answer without giving too much away, but I really loved writing the culminating chapters. Emily’s Heart is told in dual first person. It switches back and forth between Emily and her friend and love interest, Jake. I’ve never written in first person male voice, so it was interesting and fun to channel my inner teenage boy 🙂 Toward the end, as the action reaches its peak, the chapters are shorter and it’s going back and forth between Jake and Emily, each adding a piece to the puzzle, each adding his or her perspective on the action.

It took me a long time – literally months – to know how this book (and series) was going to end. I had over a 100,000 words, but no ending. Then one day the muse whispered in my ear and I knew the answer. My fingers typed fast and furious and there was very little editing of that bit of work. I hope readers enjoy it as much (and are as satisfied with it) as I am.

If you could meet any of your characters in person, who would it be?

Madame Wong. Without a doubt. I wish I had a Madame Wong in my life. Sure, she can be hard on Emily and I wouldn’t want to tick her off! But she is the embodiment of the combined wisdom of two entities that have each lived for thousands of years. I’d love to hear her stories and learn from her.

In fact, I’ve toyed with writing a novella that is Madame Wong’s story. I wonder if anyone would read that?

Celtic mythology plays a huge role in the Akasha Chronicles. What draws you to Celtic lore?

As I said above, I had this vision, did some research and I was off and running. Though I don’t have a speck of Irish blood in my veins (which is hard for a lot of people to believe given my fair skin and red hair), both lines from my family trace their lineage to England, Germany and Denmark. When I began learning about ancient Celtic myth and history, I was surprised to learn that what we refer to as Celtic began much farther east than Ireland and Scottland. What we know as ancient Celtic culture has strong origins in what is now Germany. Their language and culture spread to the west and landed in Ireland. So maybe it’s in my DNA to be drawn to the stories and lore that can be traced to my ancestors.

And now a few bonus questions just for fun…

Hmmm. I have a few, mostly aimed at my husband 😉

But in general, I am peeved when I’m out to dinner with a friend and he/she keeps texting back and forth with their spouse/kid(s)/dog, etc. I’m a mom and don’t go out with friends often, so when I do, I give that friend my undivided attention. I guess I expect the same. Seeing someone constantly looking down and typing on their tiny screen makes me want to smack the smartphone off of the table!

Wow, that was a bit of a rant. Sorry! But yeah, that really peeves me.

What’s a question you’ve wanted to be asked in an interview? What’s your answer?

Here’s a question I’ve never been asked: What’s your favorite snack food and what’s your address so I can send you a case? LOL. Just kidding.

But seriously, a box of caramel Ho Ho’s would be nice …