This is a book I read and loved a few months before I started posting reviews on here. It tells the Arthurian legend from the angle of what happens when Arthur actually is reborn in modern-day England. Now you really want to read it, right? Right?!

The boy you love is a legend.
Literally.

Now he says that you’re one too.

Blurb and cover from Amazon

Happy St. Valentine’s Day, my lovelies! Today I decided to talk about mythological love stories that end with those three magical words: Happily Ever After.

There seems to be a theme of love stories in folklore that end badly—Medea and Jason, Tristan and Isolde, Siegfrid and Brynhilde, Ino and Athamas, Inanna and Dumuzi…the list goes on and on. So I thought I would look for a few where they DIDN’T die at the end and preferably lived “happily ever after.” While it was kind of like looking for a heart-shaped chocolate box in a funeral parlor, I managed to remember these four to share with you.

The Slavic folktale of the Firebird, a young stable boy is sent by the king to fetch a young princess named Yelena whom the king wishes to marry. However, on the journey back, Yelena and Ivan fall for one another. Ivan’s friend, a shape-shifting wolf, comes up with a plan. The wolf shifts into the form of a princess who is even more beautiful than Yelena and gets the king to take him to the chapel to marry him instead. In the midst of the wedding ceremony, the wolf shifts back into his true form and the poor king dies of fright. Ivan ends up becoming the new king with Yelena as his queen. While I’m not quite sure about the moral of the story, I can’t complain about the HEA. The Epic of Gesar Khan is a tale told by both the Tibetan and Mongol peoples, set in Ling, Tibet. Gesar’s story holds many similarities to the Arthurian legends in that he unites the people and rules them justly. He cares for his wife, Sechan Dugmo, very dearly and she loves him back. After a great deal of adventure, their story ends with them leaving the country in the capable hands of their heirs and journeying to paradise. 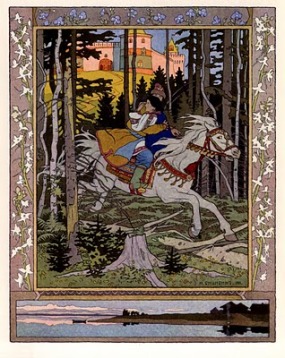 Another Slavic folktale tells the story of a young and handsome prince who comes across a slain army whilst riding. After making inquiries, he discovers that this is the army of Koschei the Immortal, a fearsome ogre, defeated by the equally fearsome warrior queen, Márya Morévna. The queen and prince meet, fall in love, and get married, but then the queen leaves once again for war. Prince Ivan goes exploring in his wife’s castle and accidentally unleashes Koschei the Immortal, whom Márya had managed to imprison. Koschei abducts Prince Ivan and it is his wife who has to go and rescue him. After nearly losing her head to a witch, the warrior queen manages to rescue her husband, and finally finds a way to destroy the ogre forever. The couple return to her castle and live in peace thereafter.

Chrétien de Troyes wrote about these two lovers in his poem The Knight of the Lion. Ywain and Laudine are rather unusual for Arthurian sweethearts in that their romance is not adulterous and actually ends in marriage. Though their love story has plenty of trouble before we get to the HEA, we get one and that’s the important part.

You see? Not every story in mythology has to be a tragedy. Most of them, yes, but not all. So do you have a favorite folktale that ends in HEA?