Posted by Elisabeth | Filed under my books, totally cool

Today I am absolutely thrilled to share with you the new cover and blurb for Thorn by Intisar Khanani. This is a wonderful book and I hope you’ll check out my review in case you need more convincing. But without further ado, the cover! 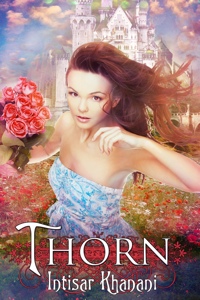 For Princess Alyrra, choice is a luxury she’s never had … until she’s betrayed.

Princess Alyrra has never enjoyed the security or power of her rank. Between her family’s cruelty and the court’s contempt, she has spent her life in the shadows. Forced to marry a powerful foreign prince, Alyrra embarks on a journey to meet her betrothed with little hope for a better future.

But powerful men have powerful enemies—and now, so does Alyrra. Betrayed during a magical attack, her identity is switched with another woman’s, giving Alyrra the first choice she’s ever had: to start a new life for herself or fight for a prince she’s never met. But Alyrra soon finds that Prince Kestrin is not at all what she expected. While walking away will cost Kestrin his life, returning to the court may cost Alyrra her own. As Alyrra is coming to realize, sometime the hardest choice means learning to trust herself.

I’m not going to lie, I’m sort of swooning for this cover.I really go for the mystical, magical look. Click the cover to add it on Goodreads and don’t forget to check out the author’s website for a totally awesome giveaway!

Ren and Axel are caught between two powerful magical races: one destined to end the bloodshed, the other out for vengeance.

Seventeen-year-old Ren Pernell is prophesied to end the war between the Dracians and the Telalians. So when a Dracian, Axel Knight, is sent to find and bring back the prophesied one before she turns eighteen and Telalians discover of her existence, unexpected sparks start to fly between the two. Once Ren finds the truth behind Axel’s arrival, she wants everything to do with him and nothing to do with his mission.

Things prove to be difficult as Ren’s life is constantly threatened by forces that are beyond her control, including the leader of the Telalians.
With the clock ticking and Ren’s life in jeopardy, it is no longer just a mission for Axel. It becomes a personal endeavor to save the only one he’s ever loved. In a heart racing ending, they must find a way to evade the preordained war that won’t also end Ren’s life.

Priya Kanaparti was born in India, grew up in Detroit, and is now living in Boise, ID. She attended Wayne State University for her undergrad degree in Bachelor of Science in Biology, and University of Phoenix for her Masters in Business Administration. Priya works as a project manager in software field during the day and lives in the world of her characters during the nights and weekends. She had found the love for reading and writing early this year, when she stayed home with her year old and needed something to occupy those ‘downtime’ hours.

She loves playing tennis on a good summer day and chess during the cold winters, but reading and writing has become a year round hobby.

She lives in Boise with her husband, son and a Yorkie. Dracian Legacy is her debut novel.

Today I am hosting a blog for stop for the very first time! Now, I’d heard about this book, and when the opportunity came along for me to be a part of the blog tour, I was THRILLED! So without further ado, may I present to you this excerpt from Shane Morgan’s Unresisting!

Seventeen year old Natasha Johnson is having a rough year. Her twin brother, Sean, died last summer after a car crash, and her parents decided to pack up and leave the only home she’d known all her life. It’s a lot to take in, and Nat has decidedly given up on the world, until moving to Stetson Valley and meeting high school ‘outcast’, Chace Owens.

Chace’s dark and mysterious aura is not exactly seen as ‘normal’, but Nat already knows that not a lot of things are of the norm when it comes to her life. She soon finds herself unable to resist Chace’s strange pull on her heart, unleashing a sudden attraction to the unnatural forces that have always been burning within her. But with uncovering her true self brings forth great danger, as Nat learns that her brother’s death had a lot more to do with the side she’s unable to resist.

Can Natasha calm the blazing flames and withstand the threat of danger, or will this new found power destroy her?

I felt someone’s eyes watching me intently. The feeling enervated me and I just had to find the source.
I didn’t have to search long as his presence blocked out everyone else’s. He gave me the impression he was around my age, seventeen. He was also remarkably gorgeous and sitting by himself at a table close to the window. Was he there when I walked in? No, I would’ve seen him. His presence was too demanding to miss.

His hand froze with the cup near his lips as if he was in shock from seeing me. What the hell! Why’s he looking at me like that? I felt awkward.

He stared at me with familiarity, as if I was a long lost friend.

I turned my attention back to the book fast and pretended not to be bothered. However, he aroused me. I wanted, needed to see if he was still staring. I lifted my head slowly but just my luck, he was gone.

Pretty neat, huh? Will you be checking this one out? =)

About Shane Morgan
Shane Morgan is a lover of “interesting” books. Her imagination is always running wild so it’s best to collect and organize them into separate stories.Shane’s love for writing started the moment she picked up a Nancy Drew book. At a young age, she began writing short stories, divulging in a variety of genres; from comedy and drama, to horror, and romance. Shane’s quite intrigued by the otherworldly or things otherwise deemed “impossible.” Well, in her opinion, people never really grow up, do they?Unresisting is the first book in her new YA series of the same title. Prepare to join Natasha on her journey of self discovery as she learns to control her powers and use them for good, fighting all the bad along the way. Of course we can’t have a girl being alone throughout the story, there has to be some romance thrown in there. And Chace will definitely steal the hearts of every female reader.
Shane Morgan’s Blog
Shane Morgan on Twitter
Shane Morgan on Goodreads

Princess Alyrra’s strength lies in silence. Scorned by her family, she avoids the court, spending her time with servants. When her marriage is unexpectedly arranged with the prince of a powerful neighboring kingdom, Alyrra feels trapped. As the court celebrates her match, dark rumors spread about the unexplained deaths of the women of her new family. Alyrra begins her journey with mounting trepidation; betrayed while traveling, she seizes an opportunity to start a life away from court.

Walking away from a prince whom she doesn’t know should have been easy. But from the moment she sets eyes on him, Alyrra realizes that her freedom could cost him his life. Without any magical defense of her own, she is plunged into a lethal game of sorcery and deceit. Now Alyrra must decide whom she can trust and what she’s willing to fight for—before her silence proves fatal.

Read from June 26 to August 24, 2012
It has been a very long time since a book captured me the way this one did. Though it was a bit slow in the beginning, once I got past the first few chapters, I might as well have been shackled to my iPhone. I simply could not tear myself away.

I had my eye on this book for awhile. The idea of a “The Goose Girl” retelling intrigued me. However, I had read another TGG retelling (The Goose Girl by Shannon Hale) and wasn’t sure it would be entirely new. I must now eat my thoughts.

The plot:
I was highly impressed. Remember how I said I was worried about originality? While I could spot elements of the Grimm fairytale, it was a whole new spin. (I know people always say things like that, but I can’t help that it’s true.) The voice and the feel were unusual and I enjoyed the mix of middle-eastern and European customs and styles.

The characters:
Princess Alyrra/Thorn is the most engaging main character I have met in a long time. All she wants is to be left alone and yet, when push comes to shove, she does step up and do the right thing. She is humble and compassionate and brave, though she doesn’t believe it. I greatly enjoyed watching her discover her inner strength to face her enemies and I was rooting for her all the way. One of my favorite things about her character was how, even after Valka had been downright sadistic to Thorn, Thorn still took pity on her and showed mercy. Compassion is a quality that seems to be growing scarce in modern MCs and it was exhilarating to meet one who has it in plenty.

Kestrin was what many would call “swoon worthy.” (While I don’t normally use that term, it seems fitting here.) Young, handsome, gallant, brave…did I mention he’s the prince? While I got a bit mad at him a few times, the greater portion of my reading was spent in agony over what would happen with him and Thorn. Not to give away the ending, but I was quite satisfied with the outcome.

Valka, the maid who betrays Thorn, is an excellent antagonist. Pampered, spoiled, selfish–she’s the kind of character we all love to hate.

Let’s not forget the Lady, the mysterious otherworldly being who starts all the trouble in the first place. As for details about her, you’ll have to read the book.

There were a bevy of other characters (Red Hawk, Falada, Violet, Laurel, Oak, Ash) who were all memorable and lovable in their own way. (I am really hoping to see more of some of them in the companion trilogy the author is working on.)

All in all, this book was awesome. Mind-bogglingly so. In other words, go get it. Right now. That’s an order. =)