I like romance, but I don’t like romance. Do you see the problem? Well, I have also found the perfect solution.

For a while there, I was really into Young Adult Paranormal Romance. The evidence is all over this blog and Goodreads, but I got tired of it pretty quick for the same reason I tired of chick flicks: there is one story. After a few (dozen) books, I recognized a definitive formula to all romance novels (they literally teach it at RWA conferences) and it just wasn’t for me.

Thing is, I still like love stories. I have a certain level of romantic in me that refuses to be denied. Despite an affinity for military history, Machiavelli, and Clausewitz, I am still a girl. It’s just bloody hard to find a love story I like.

Have long adored hardcore action stories, but I never wanted to be the hero’s girlfriend, I wanted to be his lieutenant. The one who survives to the end, saves his sorry hide when he gets in a fix, then ends up taking his place to outwit the Lannisters, defend Troy, or drive the Narens from Lucel-Lor,  or lead the Rohirriam.

The solution to wanting a surprising, action-filled storyline that examines a wide array of relationships besides romantic (but still includes romance!)? For me it was—what else?—Epic Fantasy. The Tyrants and Kings series by John Marco had the perfect level of romance. Same with the Shadowmarch books by Tad Williams, Morgan Rhodes’ Falling Kingdoms and the Mistborn trilogy. 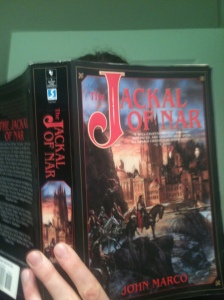 I especially appreciate how people in Epic Fantasy are a lot quicker to figure out when their romance isn’t worth causing the apocalypse—unlike people in some genres. *coughcough*

So if, like me, you crave complicated storylines, complex characters, and some swooning on top, allow me to suggest your local bookstore’s Epic Fantasy section. (In a wholly objective and unbiased manner, of course.)

8 thoughts on “The Romance Paradox”