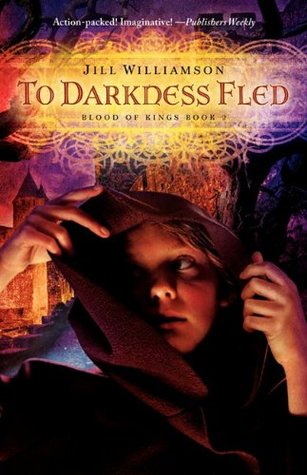 Achan, Vrell, and the Kingsguard Knights have fled into Darkness to escape the wrath of the former prince. They head for Ice Island to rescue two of Sir Gavin’s colleagues who were falsely imprisoned years ago. Darkness is growing and only one man can push it back. Achan wanted freedom, not a crown. His true identity has bound him more than ever. He must learn decorum, wear fancy clothes, and marry a stranger. Achan knows one thing for certain. He will not be a puppet prince. Either he will accept his role and take charge or he will flee. But which will he choose?

I was hoping this would be as good as the last one and yep, it was. There was a little more exploration of the religious themes, but nowhere near the overwhelming levels I have encountered elsewhere. (By “overwhelming,” I mean uninterrupted monologues that elaborate theological teachings for a page or more straight. Here the Christian elements are brought in as part of the story AS THEY SHOULD BE.)

I think this baby is 700+ pages in print. It is not for the faint of heart, but the story moves quickly and the words slip by before you know it. There was a great deal of character development in this book, especially with Achan. We meet a host of new characters and find out more about the backstory as well as the world building.

I got stressed reading this several times just because of the suspense levels, but I loved every second and I’m gobbling up the third and last book right now.

As I mentioned, Achan has a lot of character development in this book. There’s a great deal more on his flaws and his difficulties in reconciling himself with the god he was basically taught nothing about. It was something I wanted to see the author explore and she does not disappoint. Achan goes through the whole angry at God and “why me?” set of thinking (realistic, I thought) and I thought the author handled it very well.

Despite a brief stint of self-pity and some trouble with basic morality in this book, Achan is still lovable and it’s hard to hate someone the author is knocking around every other chapter. I mentioned in my review of the first book that Achan is kind of like a punching bag and as promised, things do not get better. He still gets beaten up on a regular schedule and I feel terrible for him.

Vrell is still going under the guise of a boy and Achan has no clue (for most of the book anyway, but spoilers). I made the mistake of thinking her perfect (maybe just a little) in the first book, but no. She screws up and shows arrogance and pride and pig headedness and finds plenty of ways to make the reader scream “no!” All the same, I find her to be a likable and endearing character, which it isn’t very often I am this fond of a female lead. (Don’t ask why, I just tend not to like them.)

On top of our Joffrey-esque villain, Esek, from the first book, I’m fairly certain the devil turns up. It happens a little later in the story, so that’s all I’ll say, but we definitely have our fair share of villains, I just don’t have the space to mention them all.

A great series that I wish was far more popular and I think I’ll be going into withdrawals when I finish this series. If anyone hasn’t read this, go fix that now. If anyone has, let me know so we can gush over it together.

Find To Darkness Fled on Goodreads

Find To Darkness Fled on Amazon

Find To Darkness Fled on BN.com

3 thoughts on “Review: To Darkness Fled (Blood of Kings, #2) by Jill Williamson @JillWilliamson”