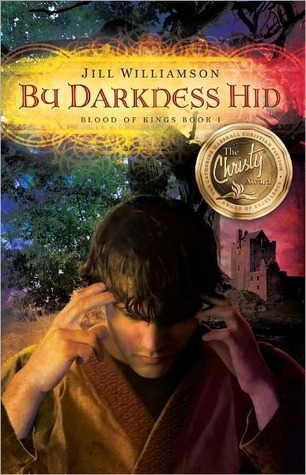 Given the chance to train as a squire, kitchen servant Achan Cham hopes to pull himself out of his pitiful life and become a Kingsguard Knight. When Achan’s owner learsn of his training, he forces Achan to spar with the Crown Prince, more of a death sentence than an honor. Meanwhile strange voices in his head cause him to fear he’s going mad. While escoring the prince to a council presentaiton, their convoy is attacked. Achan is wounded and arrested, but escapes form prison-only to discover a scret about himself he never believed possible.

This. THIS is how you write Christian Epic Fantasy. I’ll be honest, I usually hate these sorts of books. Christian fantasy (and Christian literature in general) tend to be…what is the word? Preachy. Overbearing. It pains me to say and I wish it weren’t so, yet it’s true. But none of that here.

I think I added this to my “Dear Santa” list over a year ago because it looked like my kind of trouble. Over vacation, I was browsing through my Amazon wish list and saw that it was free for Kindle. Fearing it was too good to be true, I prodded at the page for a bit before hitting “download.” A few days later, I went and bought the second. Now I’m reading the third and thinking there should be a bigger fandom for the series.

Okay, so I did feel like the story was congested for the first two or three chapters. In the beginning, I was wondering where it was headed and thinking it was a little slow, but so many people on Goodreads and Amazon had loved it and I figured there had to be a reason. I quickly discovered that there was.

I’m one of those people who takes what happens to the characters personally. I spent plenty of time pacing, worrying, panicking, and putting down my Kindle because I couldn’t take the suspense. As soon as we got through the first few chapters, the story took off like a firework and swept me right up in it. I love it when a book does that and I admit there were a few twists I did not see coming.

Achan is basically a punching bag for the local lowlife population. Poor baby. In essentially every other chapter, he’s getting punched, stabbed, shot, strangled, burned, poisoned, whipped, or something else horrible. (Spoiler: it does not get better as the series progresses.) He can be naive and occasionally self righteous, even temperamental, but all things considered, I think he turned out pretty fricking good. Sir Gavin is a knight who sort of takes Achan under his wing and I kept wanting to yell “DO NOT LEAVE HIM UNATTENDED!” every time Gavin walked off the page.

The other POV character is Vrell, a young noblewoman disguised as a foundling boy to avoid marrying the main villain. Their two storylines didn’t directly intersect until more than halfway through the book, I think, but still meshed together quite well. Vrell doesn’t take half the physical poundings Achan does (she’d probably be dead), but she still gets her fair share of trouble. She has her own set of faults and flaws and qualities and I thought she was a realistically structured character, just as Achan was.

At present, I’m trying to think of people I could coerce into reading this. I adored the story, greatly appreciated the author’s presentation of the religious elements, and I think my brothers and friends are going to have this shoved in their faces at the first possible opportunity.

Find By Darkness Hid on Goodreads

Find By Darkness Hid on BN.com

4 thoughts on “Review: By Darkness Hid (Blood of Kings, #1) by Jill Williamson @JillWilliamson”