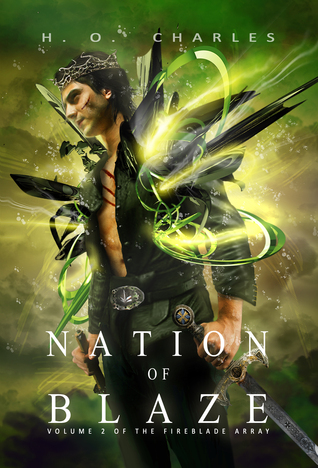 The country is leaderless. The queen is gone and hope is failing. Morghiad must find The Fireblade again if he is to secure his home and his heart, but the path will not be an easy one to tread. New enemies will rise to battle him as he battles with himself, and the most fearsome woman in history will continue to produce her army of blood-hungry eisiels. Will The Fireblade be the same as before? Will she aid him? Danger looms from all corners of this Nation of Blaze.

Volume 2 of The Fireblade Array

This was not so much an emotional rollercoaster as an emotional sucker punch. The portion of the story that is contained within this book spans close to fifty years and has more twists, turns, and little loop-de-loops than the average tangle of yarn. I read and read and read and found myself becoming more and more invested and this investment led me to skipping off to buy the third book right after I finished this one.

This series reads more like a chronicle, talking about a series of adventures, tragedies, and happenings and how they are all linked together. Normally, I despise books like this, but it seems Charles has managed to pull it off. I am definitely a fan of this series (love the new covers, don’t you?) and I’m trying to figure out why I haven’t heard about it before. It takes a certain mindset going into these books, one must do away with the modern dogma of how a story is supposed to be structured and just enjoy the ride.

I had a fondness for Artemi in the last book, but it became an all-out “my dear sweet little girl who must be protected from all evil” complex in this one. Artemi with her memories was a bit humbler than Artemi without and I found her much more empathetic and likeable and just plain adorable.

Morghiad is still an honorable, endearing, masochistic bastard. Really, there are parts were it was impossible not to want to beat some sense into him. I mean, yes, man, you screwed up. Now move on! That aside, his and Artemi’s relationship is adorable. I seem to be a sucker for multi-lifetime monogamous romances.

Artemi’s ages-old rival makes her first formal appearance. Someone really needs to lock Mirel in a lead box and chuck her in the ocean or something permanent because her existence is not okay. It really sucks when you have a bad guy who will just be reincarnated over and over. It sucks so bad.

I actually started to like Silar in this one and there was a whole new cast of characters who where introduced. Artemi’s father is undeniably huggable and her half-brother kind of disappears by the third book, but I’m fond of him, too. There’s also a cropping up of more woman warriors in this one, some of which I liked and some of which I did not.

To give fair warning, this book ended with another cliffhanger. I refused to believe that what had happened had happened and I was right, which is a good thing, or else it would be a repeat of The Assassin and the Empire. I’m about halfway through the third book and probably about to go grab the fourth once I finish and I certainly recommend this series to anyone with a taste for hardcore, original adult fantasy.

Find Nation of Blaze on Goodreads

Find Nation of Blaze on Amazon

Find Nation of Blaze on BN.com

1 thought on “Review: Nation of Blaze (The Fireblade Array, #2) by H.O. Charles @HOCharles”