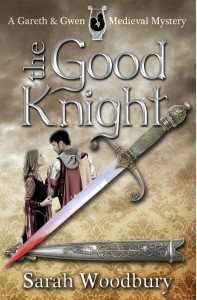 4 out of 5 stars
This was a deviation from my usual reading material in that it is neither Young Adult nor Fantasy. Nonetheless, it was free for Kindle and had “knight” in the title. I decided to give it a shot and what I got was certainly worth the read!

The plot:
This is a mystery set in medieval Wales with enough twists to keep me guessing. There’s a dash of romance, a good dose of action, and enough historical fact to make it authentic, but not overwhelming. Despite this being a little different from my normal literary fare, it was a good read and a reminder of why I used to love mystery.

The characters:
Gwen is a bard’s daughter who is also a spy for the king’s youngest son, Hwyll. She was a strong heroine who has her head on straight and her feet firmly on the ground and is clever to boot. I did like her and the side romance between her and Gareth was sweet, but not prominent enough to distract from the main story—the murder mystery.

There is this one part where Gareth is called a “good knight,” thus giving the story its name. He is one of those loyal, steadfast characters with a past he’d rather be without. He is also in the confidences of Hwyll, who gave him a sort of second chance after a conflict drove him to be a mercenary seven years before. I thought Gareth was a likeable individual overall and I did my fair share of worrying about him as the story progressed.

I’m not going to tell you about the other characters because this is a mystery after all and we wouldn’t want to spoil anything. I’ll just say that Ms. Woodbury did a good job of showing the mindset of the era and didn’t sugar coat anyone. I thought this was an excellent story and I recommend it to fans of historical fiction or even just mystery.

Find The Good Knight on Goodreads

Find The Good Knight on Amazon

Find The Good Knight on BN.com