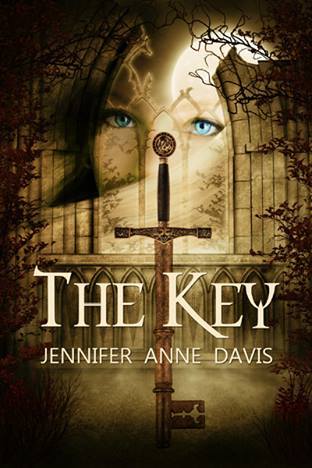 It was love at first sight, the moment I saw that cover. (I am a sucker for swords and mysterious arches and all that, okay? Okay.) I’ve wanted to read this since it came out and when the chance came to grab it for free…well, how was I supposed to resist? It was simple. I couldn’t.

This book is surprisingly short or at least it felt that way. Goodreads seems to be under the impression that it’s 342 printed pages, but I read it in a rather short amount of time. Maybe that was thanks to the succinct storytelling, not sure. There were parts of this that I actually thought should have been longer and/or had more description, just because I thought things went a little too fast. Yet the plot itself didn’t seem to suffer for it, so I suppose I can’t count off for that.

Readers should be forewarned that this book ends in a bloody cliffhanger that will make you scream at the book and demand where the next one is. If the second hadn’t already been released, I would be very deeply unamused.

There are two perspectives in this book with the chapters alternating between Rema and Darmik.

Rema was a sweet girl with a strong sense of morality, a hidden strength, and a great love of horses. (The latter earned her instant likeability from yours truly.) She stood up to the royals and showed a lot of courage, but there were still parts where she fell to pieces—realistically so. Yet the scenes where she was breaking down were done well enough to never make her seem weak, just to make you hate the rotten guts of Darmik’s father and brother (and just a little bit of Darmik at some parts, too).

Darmik was the character I both wanted to hug and slap. At the core, he means well, he just goes about doing what’s best for the country the whole wrong way. Someone needs to get him to open his eyes to the truth, but he’s still one of those irresistible characters you can’t help root for even when he’s in the wrong. And regardless, I still love the poor slob to bits.

I don’t think was an overabundance of detailed development of the side characters besides the two protagonists and the two villains. They were fleshed out according to their importance, they just sort of paled to me in comparison to the leads. I am very fond of Neco and I heard he and Ellie are a couple in Red and think they could be so cute! Anyway…

As for the main villains—King Barjon and Prince Lennek—I may or may not have made plans to drop them off at a Mord Sith temple for the horrible fate they deserve. They really didn’t have any redeeming qualities, aside from perhaps Lennek’s photogenic nature, and were essentially a pair of spoiled, whiny little girls with autarchic power.

To sum up, I shall simply say this—I’m counting down to payday so I can download Red!

Find The Key on Goodreads

Find The Key on Amazon

Find The Key on BN.com