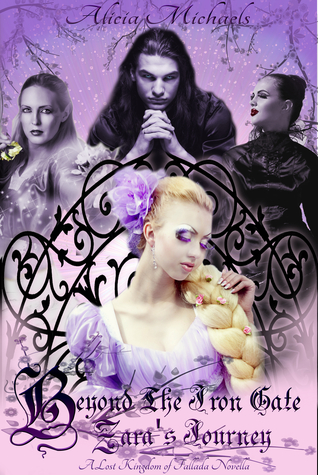 In the year 1845, before the mystical land of Fallada was separated from the realm of men forever, the two worlds coexisted in harmony. Man could mingle freely in the world of the Elves and Faeries at will and peace reigned. In the hills of Shropshire, England, just miles from the gate separating the village of Ludlow from the world of mystical creatures, farmer’s daughter Zara Wells longs for answers. It is not only the golden hair that trail feet behind her, or the strange hue of her violet eyes that separates her from the other girls her village. There is something inside of her, something touched by magic that longs to know more about what lies on the other side of the gate. In Fallada, darkness has begun to spread. As the youngest and most beautiful girls of her village begin to disappear, Zara comes closer to discovering the true circumstances surrounding her birth. Little does she know, that the closer she comes to the answers she so desperately desires, the closer she will come to being ensnared in the dark queen’s web of growing treachery.

Blurb and cover from Goodreada

If you are acquainted with the bloggersphere of Tumblr, you have probably heard the term “oh, so many feels.” If not, that means you have a life and I congratulate you, but this book left me with “oh, so many feels.” It was so sweet and beautiful and romantic and charming and heartbreaking all at once and is a kind of fairytale we need more of.

I read this in one sitting. The story trots along at a pace that keeps you hooked, showing us the villain’s diabolical workings to maintain the suspense while things are going apparently well for our heroine. It was a perfectly paced plot that packed a lot into a short space, but didn’t feel rushed or hurried at all. When I got to the end, I was left with a bittersweet feeling and a definite desire to read the rest of this series.

Zara is the Rapunzel in this retelling. Naive and warmhearted, she can’t help but feel she belongs in the world of the fey rather than that of the humans. She was a sweet and innocent character who liked to think the best of everyone and never failed to find the wonder in the world around her. She was like a little girl about a lot of things, but still brave, and that made her irresistibly endearing both to me and to Kai.

Kai is the elf who first finds Zara in a pixie-induced sleep when she wanders too close to Fallada. He becomes her friend, her guide, and eventually something more. He was a noble, protective character and it was hard not to love him to bits.

(On a side and slightly spoiler-ific note, while they weren’t actually married, I really liked that they were at least promised to each other before Kai took Zara as a lover. What? Stop looking at me like that. I’m old fashioned, shoot me.)

Even the main baddie, Queen Eranna, is sympathetic in this story. While the reader still understandably wants to dunk her over a very steep and rocky precipice, she’s not pure evil and I pitied her in many ways. But once she goes over the edge, she goes over in a big way and I think she must be a simply epic villain for the rest of the series.

The end of this novella left me a little sad and with a teeny tiny longing to wring Eranna’s snow white neck, but at the same time it was so gorgeous and I call for a round of applause for the author for this exceptional piece.

Find Beyond the Iron Gate on Goodreads

Find Beyond the Iron Gate on Amazon

Find Beyond the Iron Gate on BN.com

8 thoughts on “Review: Beyond the Iron Gate (A Lost Kingdom of Fallada Novella) by Alicia Michaels @fantasybyalicia”