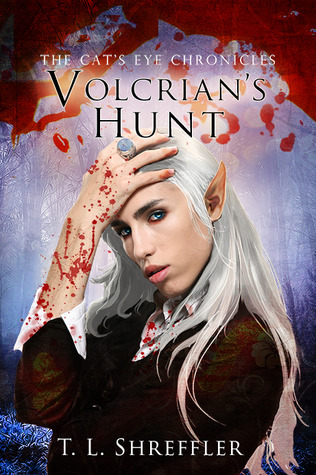 A plague is spreading across the land. Crops are rotting. People are dying in the streets. Sora, with the help of her magical Cat’s Eye necklace, is the only one who can stop it.

She must travel overseas to the Lost Isles, a place of legend and mystery. Only there can she destroy the bloodmage, Volcrian, putting an end to the curse. She is accompanied by Crash, a lethal assassin who once threatened—and saved—her life. But Sora is beginning to question her dark companion. He seems to be carrying a secret; a hidden past that could endanger them all.

Meanwhile, they are hunted by an underground society known as the Shade. For centuries, the Shade has waited for the perfect opportunity to step into the light. Now they are perilously close to resurrecting a Dark God and unleashing a wave of unimaginable destruction. They only need to collect the three sacred weapons, and Sora has already found two….

Note: This review may be less professional and longer than most because fangirling is likely to occur. You were warned.

This is by far one of my All Time Favorite series. Volcrian’s Hunt picks up a few days after Viper’s Creed left off, with Sora and Co. on board a ship destined for the Harpy islands. It doesn’t take long for the adventure/trouble to start and once it does, there’s never a dull moment! I find myself becoming more and more engrossed in this series, this world, and these characters with each new installment. This is by far one of the better books I have read and Ferran’s Map cannot arrive soon enough for me!

This book caps off the word count at over 100k, but it felt much, much shorter. I became so caught up in the story that before I knew it I had reached the end and was yearning for more. The plot is well structured with no loopholes and a cocktail of suspense, action, and magic with a shot of romance. We learn more about the Harpies as well as their archenemies, the Unnamed or the Sixth Race, Crash’s race.

I understand that the bad@$$ heroine has come into vogue and while I can be fond of the Xenas and Celaenas, I find a character like Sora, with a certain vulnerability and innocence, to be refreshing. Sora isn’t a fool or completely helpless, but she’s not a smoldering virago either. She does what she does for the sake of doing the right thing and while she has her fears and doubts, it’s her courage that pulls through in the end.

Crash has grown a lot since the first book, but the author still does a good job of reminding us who he is and where he comes from. That doesn’t change the fact that he is my favorite character and I have shipped him with Sora since the scene they met. He’s become very protective of her, but not in a possessive way (possessiveness is overrated in my opinion). I thought I couldn’t adore him any more, then came this one part where :SPOILER: he could have seduced Sora :END SPOILER: and you could tell he wanted to, but didn’t because he respected her and wanted what was best for her. My thoughts at that point were simple—AWESOME!!! If I didn’t already love him to bits, I certainly would now.

On a side note, Crash’s shirts seem have a rather short life expectancy in this book. I didn’t think the poor articles of benign clothing deserved their untimely demises, but if dear T.L. Shreffler disagrees…oh, well.

There was a female character called Krait introduced toward the end of Viper’s Creed of the same race as Crash. I’m not sure why, but I think I like her. She has that certain creepy zealot appeal and I’m looking forward to reading more about her. We also meet Caprion, a Harpy general who becomes fast adversaries with Crash. Caprion came across as a bit lofty and self righteous to me, but I’m kind of wondering if my opinion will change when I read Caprion’s Wings, the prequel novella set to come out in January. Apparently, Caprion and Krait have something in common according to the author’s website and I’m twisting my mind into knots trying to figure it out. I have my suspicions, but…

I thought Volcrian had lost it in the second book, but it was nothing compared to this one. He’s become a psychotic sociopath, hardly able to tell his own thoughts and desires from those of the Dark God who, unbeknownst to him, is using the mage to gain a foothold in the world of the living.

Though the bloodmage is a more than adequate villain, we also see a brief glimpse of Cerastes, Crash’s former mentor, who is bent on reviving the Dark God and ending all life. Though we meet him in only two scenes through the eyes of Krait, it is more than enough to tell he is going to be an unprecedented antihero for Ferran’s Map.

I think I’ve rambled on long enough, so I will sum up by saying this is a YA Epic Fantasy series worthy of obsession and definitely one to watch.