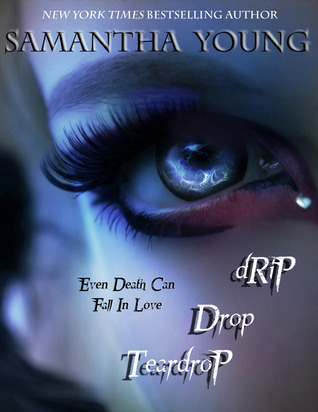 Even Death Can Fall in Love…

Avery hasn’t had it easy.

When she was ten years old her parents died in a car crash. Now nine years later her Aunt Caroline is the only family she has left. And Caroline is dying.
So when Death comes knocking (quite literally) in the form of the damaged and dangerous, Brennus, Avery makes a deal with the reaper in order to save Caroline.

Brennus is an Ankou.

One of the many, once mortal men and women, who were given the choice to become an immortal in exchange for ferrying the dead over into their afterlife.
Nine years ago Brennus took Avery’s parents and tried to take Avery, but she fought him and won. Amazed by her strength Brennus followed Avery and has watched over her.
Now he knows Avery is the one to offer him freedom from his obligation to the dead.
And he’ll stop at nothing to have her.

A YA Paranormal Romance for older readers.

This is my first sampling of Samantha Young’s work and I am intrigued. Drip Drop Teardrop takes a new, interesting twist on the afterlife and I thought it was both original and in many ways refreshing.

One of the themes in this book is the woman defending herself and not needing the man to protect her. Today in literature, particularly YA PNR, you see a lot of the girl getting into very, very bad fixes and her Prince Charming sweeping in on a white horse to save her. There’s none of that here and I’m still trying to figure out if that’s a bad thing or a good thing. On one hand, it was nice to see a heroine who didn’t need her man to rescue her when things got nasty, on the other, it would have been nicer to see Brennus show a little more protectiveness. I can appreciate that the author was trying to portray the strong female character who doesn’t need saving, but I wanted a little more proof that her significant other would do whatever it took to save her if it became necessary.

The main character here is nineteen, but I think this book nudges the boundaries of YA a little too far. Yes, there were steamy parts in here I skipped (don’t judge me). But the most disturbing part for me was the backstory of Avery trading her virginity with her high school boyfriend (who was a total donkey’s rear end) in exchange for not accepting a position at a school dance. I just—she what?

Other than my aforementioned concerns, I thought this story was well-written, interesting, and I would probably read the sequel. I am now curious about Young’s other books and I plan to start her other YA paranormal romance series soon!