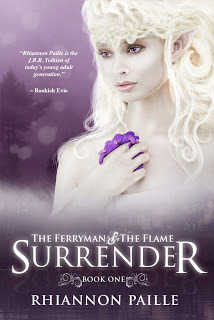 How far would you go to save everything you ever loved?

Kaliel was warned about her love for the Ferryman. One day he will marry the land and leave Avristar forever. She doesn’t listen, and because of what she is– a Flame– one of nine apocalyptic weapons, she sparks a war. In a desperate attempt to save her home and her love, Kaliel tries to awaken Avred, not knowing she may have to make the ultimate sacrifice.

You know all those times I’ve said I like fantasy romance? This is what I’m talking about. Not Twilight, not Beautiful Creatures—I bristle every time I hear the word “fantasy” in correlation with them (I consider the aforementioned to be “paranormal romance.” Calling them “urban fantasy” is perfectly fine, but not “fantasy.” I’m extremely snobbish that way.)—I mean something with magic, a fantasy world, and an incredibly nasty villain bent on world-domination. There seems to be a shortage of these, but oh well.

This book enters the outer boundaries of “epic” length at around 400 pages, but I read it much faster than some books half that size. It was an engaging read full of magic, danger, ancient powers, and a huge scoop of forbidden love. Surrender seems to be more of a set up book for the other five in the series, but it introduces the world, the dynamics, the paradigm, and the characters in a way that you care about them and understand why it is such a catastrophe when things begin to change. There were a lot of steamy scenes that pushed my comfort zone, so would you like to know what I did? Yep. I skipped them.

The main voice of Surrender is Kaliel, though we hear from probably close to a half dozen perspectives in all. Kaliel was a sweet, innocent, and somewhat naïve girl who is mostly failing in her studies and yet, has unusual gifts and abilities that no one quite understands. Through circumstance, she falls in love with Krishani and though she tries to fight it at first, they both soon give in to their desires and their passion is ultimately what causes great tragedy and death.

Krishani is supposed to be one of the Brothers of Amersil, but in his mid-teens has yet to achieve the initiation rites of one years younger. He is full of a wild and unpredictable power, yet seems incapable of performing the simplest tasks. He is supposed to go to the Lands of Men, and yet the idea terrifies him as he is haunted by dreams of death and destruction in that world. The only time he doesn’t feel afraid and like a failure is when he’s with Kaliel. I thought their romance was sweet and though there seemed to be a lot of lust involved, it clearly wasn’t just that.

There were so many other characters I’m not even going to try and talk about them all. I got mad at the Elders and their fear of change and it got to the point where I was rooting for Krishani and Kaliel, even when they were being selfish, because they were clearly the only ones who cared about their feelings for each other. (With the exception of Atara. She cared, but couldn’t really do anything.) Though I will say that Kaliel’s best friend Pux was adorable and Ms. Paille’s explanation for why the sky turns pink was ingenious!

So why only three stars? Well, those steamy scenes I mentioned earlier kind of interfered with my enjoyment of this story and I thought it was a bit too much for the YA label, but I agree that is an entirely subjective thing and I started the second one right after this one. It was an original and engaging story and I hope you’ll check it out!

6 thoughts on “Review: Surrender (The Ferryman and the Flame, #1) by Rhiannon Paille”