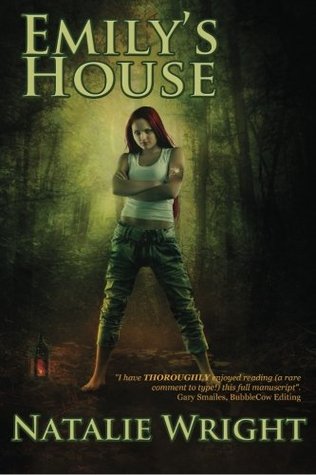 Fourteen-year-old Emily Adams is flunking math – and life. But Emily has a secret, one that she has kept even from her best friends. Soon the ancient legacy coursing through her veins will force her secret to be revealed. Dormant for over a thousand years, an evil has arisen and this time, it will destroy anyone – or anything – that stands in its way.

Three teens embark on a dangerous journey and risk everything. For Emily, the fate of her friends – and her world – lies in her hands.

Travel with Emily as she unlocks the secrets of her Celtic ancestors as she goes on a mystical journey to the inner house and beyond.

It took me months to read this book. Why? I really, really don’t know. I think it was a good story, but I just couldn’t appreciate it. It might’ve been in small part to the fact that there was a few passages that perpetuated the stereotype of Christian clergymen being pompous fools who were set on nothing more than conforming the whole of the earth. There is a large section, perhaps 20-30% of the book, that is dedicated entirely to the backstory of what happened to Emily’s ancestor, the last Priestess of Brighid. I thought that part was kind of annoying and I didn’t consider it entirely necessary, but lots of other people said they liked it, so it must’ve just been me. This book is listed as YA, but I really think its closer to MG. It talks about some adult topics, but the main character is fourteen and I felt like I was reading a younger reader’s book. However, that is not a bad thing, just something I noticed. This book was infused with a great deal of snark and sarcasm and I found myself laughing often enough. There was also a strong theme of maternal love and I greatly enjoyed that part.

I kind of thought the plot dragged. Like I said, I think about 25% of it could have been cut. I don’t really have a whole lot of feelings on this book, because I really didn’t get into it. (I’m truly sorry, Ms. Wright!) The ending portion was very fast-paced and I wonder if it was just that I didn’t sit down and read it all at once. (Like I said, I read this over a course of months.)

Emily is a bit sassy and bad-mouthed and I kind of found it hard to relate to her. I seem to have trouble relating to the sassy-teenager characters because…well, I have no sympathy for them. The story of her mother and the abuse she received from her aunt Muriel were all empathetic points, but I wish she hadn’t been so snappy.

Her two sidekicks were funny and cute and once her dad (aka “Zombie Man”) “woke up,” he was the epitome of the concerned and well-meaning father.

Nonetheless , I think my favorite character was Dughall, our super-villain. At first, we think he is simply a power-hungry tyrant out for, well, power. But then we see the story of Dughall’s childhood and the reasons he’s so set on reaching the Netherworld. His history reminded me of one of my characters and that made me empathize with him. I really hope everything turns out alright for him after he gets his second chance the end, but I guess I’ll just have to read the next book to find out!

All in all, a good YA read and I’m not sure why I couldn’t get into it.